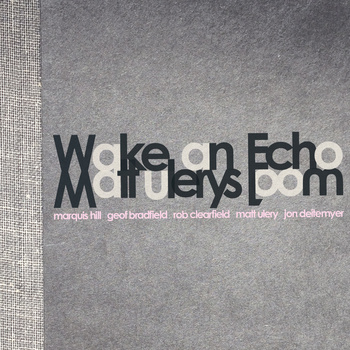 Chicago bassist, Matt Ulery, is everything that is right about the ever-diminishing Jazz scene. Wake An Echo, the latest album with his quintet, Matt Ulery's Loom, is a non-stop highlight of what makes him such a treat and that is: composition comes first. It is shocking to me that the majority of material coming from the Jazz community these days is stuck in two dimensions. The first is defined by those still relying on the 'head-solos-head' formula, where the skill of the players has to be enough to uphold the want of the listener to ignore all that is missing in the way of composition, harmonic diversity and story telling. The issue with this is that the majority of the new Jazzers don't have the chops to pull this off. As with everything else in Western culture, there is a watering down of highly skilled talent as we constantly live in a world where there is too much distraction and everyone needs everything now. It seems/sounds like the young guys are not spending eight hours a day in the shed as their predecessors once did. Heck, I don't blame them especially when you consider that unless your last name is Marsalis or you're a female Jazz singer, there isn't much of a career to be had as a Jazz artist. Music should always be about the music and not what you can get from it. However, everyone has to eat. There are just so many more avenues for young players to musically explore these days than simply becoming a virtuoso and most of those other options pay. The second dimension that Jazz finds itself in is the smooth jazz genre. I mean, horrible. Just horrible. People's poor attempts to find a crossover between Jazz and some form of awful commercialism. There isn't a crossover. Please stop. (Oddly enough, it wasn't that long ago that there was a growing enthusiasm for a third dimension of Jazz, that being the Jam Band scene. However, it seems that this has dried up mainly because the Jammers weren't making a living so they tried the whole crossover thing (see Soulive) and in the process essentially killed that sub-genre of Jazz.) Now, due to the likes of Matt Ulery, Brad Mehldau, Darcy James Argue, and Mary Halvorson, there is still something to thoroughly enjoy in the genre of Jazz. This being the art of keeping the virtuosity that jazz embodies while encasing it in phenomenal composition. Wake An Echo is the very definition of this. From start to finish the music is near cinematic in its scope. Each song is a complete journey with melodic motifs and phenomenal varied and inspiring interplay (composed and improvised) between the five artists. There is a feeling of perpetual motion even with Ulery's emphatic use of modal harmony. The solos, which are of astounding quality, become part of the composition instead of a stand alone aspect of each tune. The playing of pianist, Rob Clearfield, should be noted for the beauty he is able to achieve in simplicity when needed but also in his complex eccentricity that makes you wonder how many fingers he really has. Geof Bradfield on bass clarinet really gives the album its sonic depth and unique playfulness while the trumpet player, Marquis Hill reminds us all that the trumpet can be a team player in tone and artful attack but of course, when called on, such as in 'My Favorite Stranger', can still lead and direct. Ulery's compositions are multi-layered, thick, and ever expanding that makes their long playing times seem unnoticeable. Like a good movie, you only notice how long it is when it's not very good. If ever there was an album that lends itself to someone making a full length feature based on it, this is the one. From the delicate piano opening of 'The Lady Vanishes' until the last note of the sensually dramatic, 'All The Riven', this album like Ulery, is everything that is great about modern music.

Yes, quite nice! Like the laid back feel, yet plenty of tension at times.

Andrew Scott ranks this as the
#2 favorite album of 2013