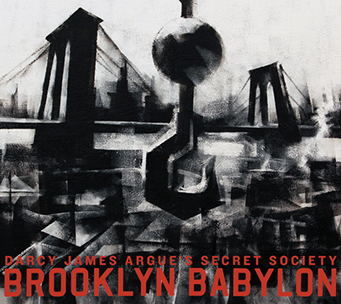 Darcy James Argue is a Canadian born, Brooklyn based compositional genius. The Secret Society is his 18 piece 'everything' orchestra that is Argue's modern day take on a big band. Although this might cause the reader to think swing, swing, swing, they should be thinking swing, funk, baroque, traditional folk, marching band, etc. (ie every genre imaginable). The instrumental line-up may be traditional in most ways but the music that the Secret Society gifts us, certainly is not. With Brooklyn Babylon, Argue's Secret Society's second album, the depth and cinematic scope of Darcy James' abilities as one of the most diverse composers of his generation are in full swing (hah!). The seventeen tracks present on the album are actually one half of a multi-media collaboration with Danijel Zezelj, an illustrator/painter. Zezelj, through his art and moving illustrations, and Argue through his masterful music, combine to tell the story of 'Lev, a master carpenter' who is in charge of building the largest building known to man in the heart of Brooklyn. The story is not well defined or in excess but we understand that what is to be represented in the telling of it is the multi-cultural environment found in Brooklyn and the different opinions on what is soon to change the very essence of their neighborhood. Keeping in mind that we are only getting one half of the overall experience of Brooklyn Babylon when listening to the album, it is easy to feel as though, as the listener, you are getting an incomplete picture. This is so often the case with soundtracks that really play to the action in a scene instead of just providing an atmospheric backdrop for what is occurring visually. Fortunately, the unbelievable quality of the music, the ever changing landscapes we are brought through by it, the sensational playing of the band as a whole and individually and of course, Argue's complete command of melding multiple influences into his own unique sound on quite literally every track, soon takes that feeling of a void from us where the visuals would play its role. As the 'Prologue' invites us into Argue's Brooklyn Babylon, we are treated to an up-tempo 3/4, Eastern European 'oompa' groove (clearly don't know how to describe it) that runs through the themes that later we are exposed to in greater depth. 'The Neighborhood' plays with the diversity ever present in Brooklyn. This is the cause of the dissonance and tension amongst the orchestra members but as in life, this tension breaks when Darcy finds a way to make their individual voices play together, creating a whole new feel for the piece near the end. Next up is the first of seven 'interludes' which by themselves are phenomenal teases of divine musical intervention. The seven small works (each running on average just over a minute) take on a life of their own, somewhat portraying a character that comes in to break up the action through various instrumental combinations (double bass and accordian, flute chorus, solo acoustic guitar and so on) and sweeping genre explorations. Each and every one of the interludes brings something necessary to the suite avoiding being a filler in its nature. It is at the tenth track, Builders through to track 14, Grand Opening, where Argue really shines the brightest. He tells the heart of the story by allowing the orchestra to seamlessly flow through various musical acts, minute to minute. Close harmonies grow expansive in a measure. Interplay within the orchestra becomes intricate and then suddenly unison. Rhythmically we are not overawed in the overall sound of the orchestra but when looked at individually, the parts are inspiring in their movement. Overall, Brooklyn Babylon gives the listener that which you would expect from a story of construction; a very industrial feel to its sound. It is metallic but not abrasive ever. It is a masterpiece that stands well above the cut without its visual aid partner and is another example of Darcy James Argue's brilliance.

Andrew Scott ranks this as the
#3 favorite album of 2013