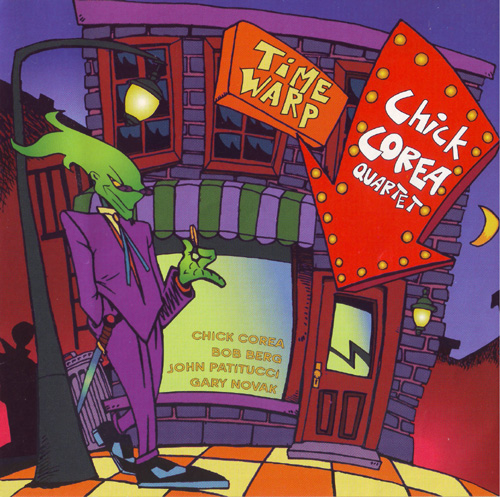 I share this album for a multitude of reasons. Firstly, it is an all time favourite of mine. A desert island, top ten. An album that I clearly remember hearing and being pulled apart by it on an emotional level and as an aspiring musician. I remember thinking that this was the kind of music I wished to part of. These were the type of tunes that I wanted to write and play over, forever. That the playing of Bob Berg was an end point to where I wanted to be as saxophone player. It was musically a sensational moment in my life that I could never forget, especially as with each passing listen, I get to relive the magic of it all, over and over again. Another reason to share this timeless piece of perfected art is because it is such a relatively unknown work of Corea's acoustic quartet. Ask me a million times over a million years and I could never explain or understand why. The premise of the album is outlined in the liner notes which unfortunately I do not have anymore and for the life of me I cannot find anywhere. Within the notes was a story which the music is laid out to convey. From what I have since read about the story, it was convoluted, made little sense and didn't add much to the magic of the album so I don't feel so bad being so in love with Time Warp and not knowing its premise. All I need has nothing to do with liner notes and everything to do with the phenomenal playing of Corea, Berg, John Patitucci and Gary Novak. I mean, re-read that line-up! Novak and Patitucci are the perfect bass/drummer combo to attack the swing of Terrain, the dis-jointed funk of Time Warp, the emotional spirit of The Wish, the samba of Discovery and the aggressive nature of New Life. They are a study for all young rhythm sections in their interplay and how they play to their responsibilities as such. I doubt I have to say much about Corea. Melodic monster. Harmonic high-stakes gambler. Emotive as ever a player has been. Berg? This is still the album that inspires me as a sax player, let me put it that way. His tenor tone is as pure as it gets. His soprano speaks more than it plays. The tunes individually are of the highest degree of art but put together they tell a story and take us on a journey far beyond what one would ever expect. Time Warp is just the definitive quartet album post-60's. In debt always as I am to this album, I pass on its existence to any and all that are willing to experience expertise on all levels imaginable.

I forgot how much you love this album. I'll pick it up tomorrow. I like the Chick acoustic albums that I have a lot.

Picked it up today.

I bought it, isn't that enough?