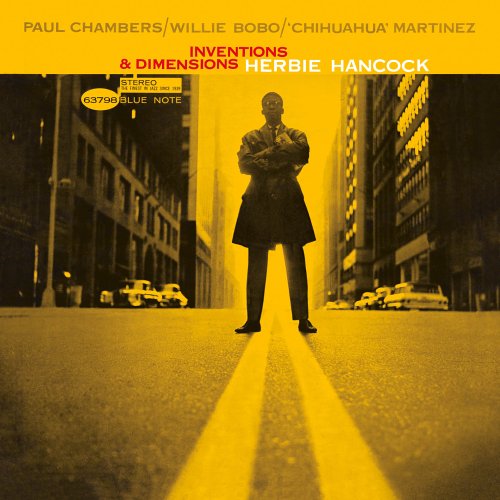 For some reason, Inventions and Dimensions has become a rather lost effort in Herbie's catalog. It could be because of the often dismissed 'Latin jazz' influence, given weight here by Willie Bobo (drums) and Osvaldo Martinez (percussion). It could also be because it had the unfortunate luck as his third album to be stuck between the masterpiece, My Point Of View (1963) and the iconic and legendary, Empyrean Isles (1964). It could even have to do with the fact that there is little to hang your hat on as far as extended structures, chord changes or even melodies for the tunes at hand. However, this is not an album to miss. Actually, because of its unique sound in comparison to other Herbie albums of the 60's, it's a must listen for all. The first thing that jumps out of Inventions is that this is a pure groove album (I do not mean 'funk' when expressing 'groove'....it's a shame that the 'g' word has been manipulated in our modern times to mean such a thing). Bobo, Martinez and Paul Chambers (bass) are there as set up men to Herbie. There's hardly any playing outside of the groove and even when it's their time to solo they remain solid and inside of the beat. It's quite possibly some of the greatest foundation, grounded and purely unselfish rhythm playing of any of Herbie's albums at around that time. This being the case and with no other musician to share the stage with, Inventions highlights some of Herbie's best improvisations ever. In every tune he is let loose by his guys and the grooves and he takes it on, full speed ahead. The tip of the top comes via his sensational playing on Jack Rabbit. The whole album is for and about Herbie and he shines over and over again. With the perfect balance between swing, latin and straight playing in every tune this is an album to get lost in. It's hypnotic and of the highest order.

Never heard this one.