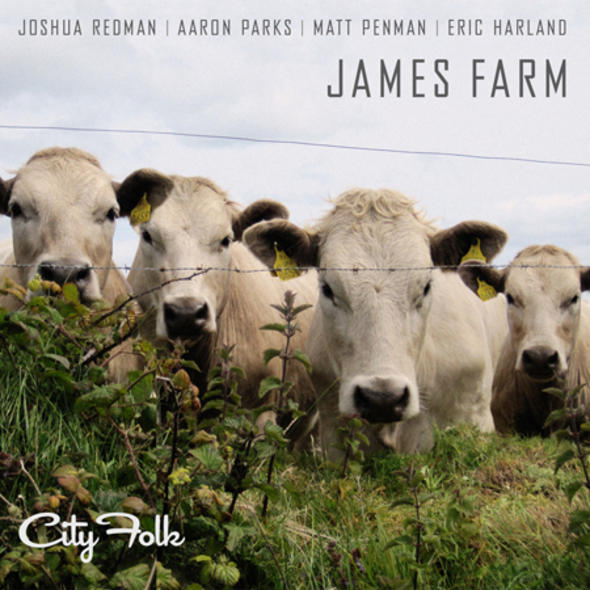 What on earth happened here? Did I buy the wrong album by mistake? Is this really Jazz’s super-group, James Farm? Look, I can’t sugar coat this at all - this is a rather boring and disappointing album - a letdown if only in minor proportions and as a huge fan of Joshua Redman and Aaron Parks, it pains me to acknowledge this. Let me get the good out of the way and then hopefully keep this short. First of all, James Farms’ sophomore album is going to be better than most other records out there. It’s more than listenable and for people that want to look like they know a thing or two about Jazz, they now have the perfect album to play at their martini parties. It’s unobtrusive, extremely straight (good lord it is straight!!) and positively ‘ok’, so casual listeners will have no trouble digesting it. However, in comparison to their debut album it sounds so watered down that there’s absolutely no way to catch a buzz off it no matter how many times you pour it into your ears. Where did the aggressive, sinister, intricate and daring James Farm go? Where is the ‘I-10’ or ‘Chronos’ of this album? It’s truly baffling that, whereas on their last album talent of such high degree was celebrated, on City Folk, somehow the players come across as rather dull, somewhat pedestrian and particularly uninspired. It’s hard to be convinced that the same sensational Joshua Redman, the brilliant saxophonist who just this year released the jaw dropping Trios album, is truly invested in City Folk in any way . Certainly I have never heard him playing so reserved or formal. There honestly is not a single moment on the album that you get the feeling he is really letting go. There is no exploration of the songs in his playing and it’s so upsetting to him sound as though he’s run out of ideas during his solos. He certainly isn’t helped by the fact that he is mixed far too low on all the tracks. Just boosting him a little during production could have maybe made up for the lack of intensity. Then there’s the phenomenal pianist, Aaron Parks, who leaves no imprint on this album. I have listened to his solos intently and there are hardly a few lines that stand out in all ten tracks. The lone bright star on City Folk has to be drummer, Eric Harland. This man does all he can with what he is given and at least makes some tracks enjoyable with the fantastic interplay among his kit. He especially shines on ‘North Star’ which is easily the best track on the album with the piano solo section being of special note (but for Harland’s playing, not Parks).  To really sum up the entire album, one need only listen to the opening track, ‘Two Steps’. The tone for the album is set up perfectly as the track simply plods along in a rather ‘ho-hum’ manner. It’s like they’re saying, ‘Here we are and (yawn), we’re going to play a song of some sort.’ The melody is cliché; I’ve heard more dramatization in an Adam Clayton bass line than what Matt Penman comes up with; and Redman and Parks come across as bored with the song. So much so that they cannot even muster a dangerous turn at any point in time in their solos. ‘Jury’s Out’ and ‘Otherwise’ suffer from this same sort of stuck-in-the-mud grooving. Well, at least they have some sort of movement, slow even so. ‘Farms’ on the other hand, a ballad of sorts is so uninspiring it stalls the album and the second half of City Folk never recovers. ‘Unknown’ unbelievably sounds like the end jam of a live Dave Matthews Band song - especially as Redman takes to the soprano sax. Then there’s 'Mr. E.' The ‘A’ section of this track sounds like something a suburban highschool jazz quartet would cover….and think it’s really hip. It’s a poor attempt at being aggressive and half way through the track, out of nowhere it trips into some sort of timeless, free expression section which unfortunately, sounds like you would imagine it would if you told that suburban highschool  jazz quartet to play whatever they ‘feel’ at that moment. At the end of track, again, out of nowhere (and not that really hip ‘out of nowhere’ that makes you go ‘oh sh%t!’) everything just drops and we head into some passive bossa nova groove. The album eventually fizzles out with ‘What Remains’ and when one compares this snooze of a song to how they ended their debut album (The Trickster), one has to wonder how did they get it so wrong this time around.