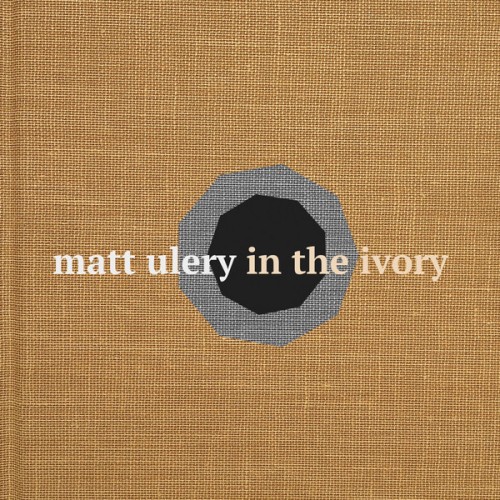 ‘In the Ivory’ is the sensational Matt Ulery’s second foray into the relatively young, genre-bending style of Chamber-Jazz music (this being as it sounds – classical styles of composition infused with Jazz sensibilities and improvisation, boasting an ensemble of musicians from both sides of the street). Ulery, the bassist on and composer of all the tracks on the double album (yes, double album), brings back pianist Rob Clearfield, drummer Jon Deitemeyer and singer Grazyna Auguscik to represent the Jazz collective and his choice for the classical contingency is the Eighth Blackbird ensemble (themselves made up of two woodwind players, a string quartet and a percussionist). With such an immense amount of talent to take advantage of, it gives his compositional skills great credit to say that it’s the music and not the players that really stand out throughout, ‘In The Ivory’. In part this is because a lot of the music is through-composed (in the Classical style) and within these compositions there is rarely a virtuoso turn in any individual part for the musicians to get stuck into. I would, however like to point to the remarkable playing of Clearfield who is the focus of the rare improvisation sections on the album. His solos on, ‘Black Squirrel’ and ‘The Farm’ are the true embodiment of what Ulery admits he is looking for in his Chamber-Jazz work – beauty. “I’m trying to write something beautiful, trying to create some beauty in art….Not in spite of anything, not to go against anything – just because we could use it.” While this may seem innocent or perhaps even naïve in its sentiment, the music that is created is far from both. More importantly, Ulery avoids any note of pretentiousness that one could be vulnerable to when you’re composing what is currently a niche style of music. Indeed, Ulery is well aware of who’s listening to him. “Our audience is still small. The percentage of people into this weird art music is small.” This awareness is extremely encouraging when you listen to, ‘In the Ivory’ and find that in many ways it is very accessible to all ears. It’s not written for a select few who would love to hang their hat on another far-reaching, avant-garde piece of music. It’s also not written for your average radio listener. It’s written with a purpose not a target and how stunningly beautiful, ‘In the Ivory’ is, is a credit to Ulery’s desire to find beauty in his art.

Although ‘In the Ivory’ is a combination of two different styles of music, it is less a blend of tastes as opposed to being a layering of them. At times it can be obvious when the classical section of a track ends and the Jazz then comes into play. Although it sounds like this could give a choppy effect to the music, it does not do so at all. Actually, the change in direction is always so slight as neither the Jazz or Classical side of the compositions are written in any sort of contrast nor do the genres slip into the further ends of their spectrum. In other words, you don’t go from Bach to ‘Bitches Brew’ in one track. Often the changes come as a breath of fresh air as on, ‘Black Squirrel’, where the first half is primarily a vehicle for a string quartet to play within Eastern European harmonies, but as the track progresses, gives way to a Jazz quartet to improvise through a modal section (a la ‘So What). The combination of the European harmonies fits so decidedly well with the choice of modal Jazz that there is no divisive contrast, just compliment. This compliment is also heard on the stunning ballad, ‘There’s a Reason and a Thousand Ways’, as to begin with, the wonderfully understated singing of Grazyna plays with the string quartet in a solemn and elongated manner but then via a brief interlude the music turns to an uplifting and far more rhythmically daring section. These intersections of genres are not the only way that Ulery presents his music. At other times during the album, Ulery chooses to stick within a singular genre and in doing so creates different colors for the album to explore. Indeed, three of the tracks are written solely for the string quartet with the allegro pizzicato of, ‘Innocent’ and the patetico of, ‘Longing’ being wonderfully contrasted between themselves and ever so slightly with the album as a whole.

As to be expected with such a diverse array of musicians and styles, some of the tracks on, ‘In the Ivory’ have a very cinematic feel to them. The overall album opener, ‘Gave Proof’, with its eerie piano intro and subsequent melody in the cello, sounds like a Danny Elfman effort for an opening scene to a Tim Burton movie (probably starring Johnny Depp). ‘Resilin’, the opener for the second half of the album is very obviously supposed to be the brother of ‘Gave Proof’ and as it shares a similar piano part, it too shares in the cinematic value of its relation. This leads us to the one thing that seems to be missing from all of the good that Ulery has done here – that is the’ why’ behind the decision to release it as a double album (particularly during these days of digital downloading). There is no story to support two separate acts and certainly, the second set of seven tracks don’t necessarily feel like a follow up to the first seven. The opening track of each album, as mentioned are related in obvious musical ways but other than that, there aren’t any flashbacks or recalls found in the second act as were in the first. It doesn’t detract anything at all from the overall album, it just doesn’t seem to have a purpose.

One constant throughout both albums is the glorious and effortless singing of Grazyna Auguscik, who guests on two songs per album. In particular, the soft part she plays in the music of, ‘Visceral’ is ethereal with that track in essence being the highlight of, ‘In the Ivory’ - an album that is full of ultra bright moments throughout. The presence of the vibraphone on, ‘Visceral’ and the delicate interaction between the genres is extremely seductive and mesmerizing to a point that you can’t help but going back to it again and again.

For an album as such – one that has no low points or dull moments – the fact that it has an ending is disappointing. Fortunately, Ulery leaves us with quite possibly the most beautifully written piece of music of 2014, ‘Viscous’. It is a solemn piece written as a showcase for the string quartet and one has to wonder, what love and what sorrow Ulery must have been privy to in his life to write such a piece. It is the epitome of what he said he was looking to create with, ‘In the Ivory’ – beauty – and the most magnificent send off to one of the year’s best albums.

Andrew Scott ranks this as the
#6 favorite album of 2014