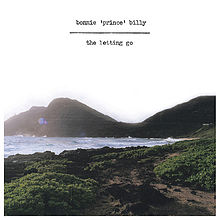 Like Post-War, this is exactly the album I expected from William but didn't think he had it in him. Credit where credit's due, Dawn McCarthy from Faun Fables brings a wonderful vocal counterpoint to Billy's mumbling baritone. The Letting Go was recorded in Reykjavik with Dirty Three drummer Jim White and produced by Valgeir Sigurosson, (whose last name reminds of another Icelandic favourite) the man responsible for virtually everything Bjork's done. Tony once mentioned that Johnny A's debut had exactly the look and sound that he was looking for and Greg would undoubtedly love to be responsible for every Calexico release (bar the latest according to his Top Ten). I'm not entirely sure which album Jeff, Chris, Arun, etc. feel 100% akin to but The Letting Go is pretty much exactly the album I would like to call my own if I wasn't already busy working the Berlin Philharmonic.

Highlights: Strange Form of Life (Background oo's and ah's and other assorted sighs are magnificent)

Cold & Wet (Does Devendra Banhart know that Bill is on to him?)

Lay & Love ("when you walk in things go luminous")

The Seedling (Yikes! This really is one heavy and scary joint)