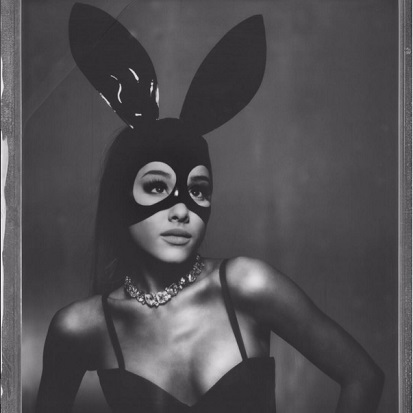 I can only expect to catch some flack for this not only being my #1 for 2016, but for it even being in my top ten. Regardless - being honest with myself, I have listened to this album almost non-stop from the moment it was gifted to us, the general public, in May. Just as thankful as I am for this near-to-perfect album, I am just as thankful that I closed my LastFM account earlier in the year, as there is now no proof that I more than likely listened to this album ten-times more than any other album this year.

Coming in at fifteen songs (and a perfectly timed fifty-five minutes), each song boasts a perfect blend of pop with either house (“Into You”), dance (“Be Alright”), hip-hop (“Let Me Love You”), R&B (“I Don’t Care”), Reggae (“Side to Side”), Soul (“Dangerous Woman”), and even Jazz (“Moonlight”). There’s a throwback to the 80s, complete with synth work and fuzzy bass, (“Greedy”) and the obligatory sugar sweet pop-classic-in-the-making “(Bad Decisions”).

Perhaps more so unique about this album than any other pop album I have heard in recent years, is that the pièce de résistance comes in the form of the last three songs of the album, where it gets near to conceptual, sounding like a mini-pop opera. “Touch It” is a powerhouse, midtempo ballad (yes, midtempo ballad), whose bass-heavy-sonic-sounding chorus absoluletly ecompasses the obsessiveness found in the lyrics of a woman who is struggling in the absence of her love (“Remind me again why we’re taking a break/It’s obviously insane”), striking a brilliant juxtaposition with the fragility of the verses (“How do I make the phone ring?/Why do I even care?/How are you all around me when you’re not really there?”). The penultimate track, “Knew Better/Forever Boy” combines a wonderfully rich contrast between the spaced-out “Knew Better” with the soft-house mix of “Forever Boy.” In the former, our heroine appears to have moved on from her obsessive tendencies found in the previous track, to find a fiercely independent spirit (“You could write all those songs/That’s the game you play.../But you can’t make me stay”), though the drunk-sounding tone of the music suggests that this independence is tainted due to the help needed by some artificial highs. “Forever Boy” completes the adolescent-cycle of breaking-up, wanting your love back, getting over your love, and then quickly finding love again in the form of another heart - the cycle in play for those young hearts that are more so obsessed with being in love, as opposed to loving the person whose heart they hijack. (“Been friends for a minute/So you know just what I like.../You’re my forever, boy.”) Finally, this exquisite album leaves us with the positive and impassioned plea of a woman in love, missing her man (“Thinking Bout You”). Bordering on the possessive again (“Oh I don’t have you here with me/But atleast I have the memory/I tried to make it through the night/But I can’t control my mind.../I wish you would hurry up and come back”), the song doesn’t paint the perfect picture of a love destined forever, but it gives us hope that perhaps our heroine is getting closer to finding such a thing.

There is not a track on this album that even slightly begs the finger to hit that “forward” button, with all being skilfully composed and boasting phenomenal levels of production. That being said, personal favorites include: “I Don’t Care,” “Touch It,” and “Bad Decisions.”

As with her previous two albums, the real highlight of this album is Ariana’s acrobatic vocal skills (I don’t like using that cliche, but it works so well in regards to what she does). Even if you are an ardent and adamant hater of her music, no-one that has the ability to hear can argue against the fact that she is one of the greatest singers of popular music, all-time. Her voice is simply sensational, and when we get to hear her live, it is reassuring to know that there is absolutely no studio trickery in her sounding so phenomenally brilliant. In all genres, throughout the entirety of her vocal range, she is supremely and exquisitely talented, with close to no-one being her equal on the radio these days or in the past. With ease, she conveys all emotions with an honest sincerity (though I still give the crown of passionate pop-vocal performances to Demi Lovato), and whether Ariana writes her own lyrics or not, we still buy into that what she sings about.

As far as I am concerned, Ariana Grande has now released three phenomenal albums. Her first two toyed with various song ideals, with the tracks primarily being a way to showcase her singing skills. On Dangerous Woman, the quality of the tracks are finally on par with her vocal abilities, making it, for me, the best album of 2016.

Andrew Scott ranks this as the
#1 favorite album of 2016