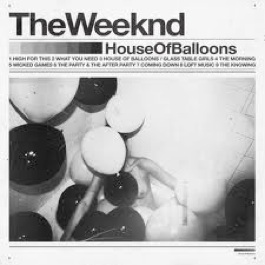 The Weeknd is the triply R&B project by Canadian singer/producer Abel Tesfaye. "House of Balloons" is the first of three free mixtapes that were released by The Weeknd this year. (the other two are worth a listen, but far from what this one is) The album is a soundtrack to a drug fueled night in some seedy underground. The vocals are melodic R&B, layered over trippy, atmospheric beats. It's hard to pin down any one part to this album before another interesting texture shows up. It's not a miss mash of sounds though. It has a flow from beginning to end that's held together by the songwriting. The lyrics and beats equally surprise with each twist and turn. While the other two albums released didn't live up to "House of Balloons", Tesfaye definitely has shown himself to be the type of artist where you can't wait to see what comes next. - (Try "The Morning" & "Wicked Games")

Abel's debut is the best of the trilogy. I wish he'd stuck to the outskirts of hip-hop and not fallen in with that bad influence Drake. http://www.youtube.com/watch?v=kSiei_6jI1c "Got the walls kickin like they six months pregnant."